Toyota to invest over Rs 2,000 crore for expansion and localisation in India

New Delhi: A day after reports in the media surfaced that Toyota Motors is not expanding in India, Vikram Kirloskar, vice-chairman of Toyota Kirloskar Motors, has clarified that the company is actually focusing on technology expansion and localization and is investing over Rs 2,000 crore for the same.

“Toyota’s focus is on technology expansion & localization & is investing 2000+ crs for the same. I believe that a GST readjustment is required in the future to encourage green mobility. Carbon-based tax will also make the Indian industry more competitive,” Vikram Kirloskar tweeted. 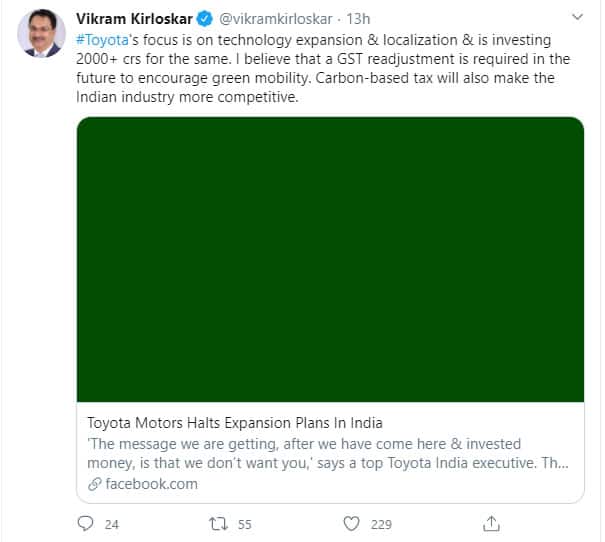 A Bloomberg report earlier, citing Toyota Kirloskar Motor vice chairman Shekar Viswanathan said that the companies are finding it ‘hard to build scale’, high tax regime. Viswanathan further told Bloomberg that though the company is not exiting India, it will not scale up either.

Meanwhile, Toyota in a response to Zee Media said, “Toyota Kirloskar Motor would like to state that we continue to be committed to the Indian market and our operations in the country is an integral part of our global strategy. We need to protect the jobs we have created and we will do everything possible to achieve this. Over our two decades of operations in India, we have worked tirelessly to build a strong competitive local supplier eco-system and develop strong capable human resources. Our first step is to ensure full capacity utilization of what we have created and this will take time.”

“In wake of the slowdown that has been exaggerated by the COVID-19 impact, the auto industry has been requesting the Government for support to sustain industry through a viable tax structure. We remain confident that the Government will do everything possible to support industry and employment. We recognize the strong proactive efforts being made by the Government to support various sectors of the economy and appreciate the fact that it is open to examine this issue despite the current challenging revenue situation,” the company added.

“Our recent partnership with Suzuki in India on sharing technology and best practices are also in support of the “Make in India” initiative and Indian Government’s policy, and aim to enhance the competitiveness of both companies,” it said.