Veteran wicketkeeper-batsman Mahendra Singh Dhoni made his much-awaited return to action on Saturday when he successfully led his franchise Chennai Super Kings (CSK) to victory in the opening match of the 2020 edition of the Indian Premier League (IPL) against defending champions Mumbai Indians at Sheikh Zayed Stadium.

It was the 39-year-old former Indian skipper’s first match since India’s dismal 18-run defeat at the hands New Zealand in the semi-final clash of the International Cricket Council (ICC) World Cup last year.Dhoni had also bid adieu to his 16-year-long illustrious career on the occasion of India’s 74th Independence Day.

On Saturday, the fans of ‘Thala’ Dhoni were left thrilled on finally seeing his return to cricket after much delay. In fact, Dhoni’s wife Sakshi was also in awe of her cricketer husband as he returned to action after 437 days.

Sakshi took to her official Instagram account and shared an adorable picture of Dhoni in his new muscular and robust avatar.

“How handsome,”she wrote along with the picture of Dhoni on his Instagram story.

Take a look at the story: 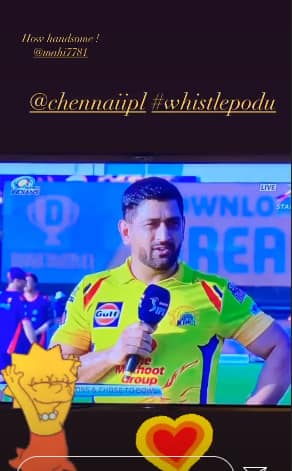 Skipper Rohit Sharma and opener Quinton de Kock made a solid start for Mumbai Indians by bringing the side close to 50-run mark after just two overs.

Following the duo’s departure, Saurabh Tiwary notched up a quick-fire 31-ball 42 runs besides stitching a 44-run stand with Suryakumar Yadav (16-ball 17) as Mumbai Indians posted a score of 162 for nine in their stipulated 20 overs.

In reply, Ambati Rayudu (71) and Faf du Plessis (unbeaten at 58) joined forces and the duo not only smashed a half-century each but also stitched a crucial 115-run stand for the third  wicket to help CSK chase down the target in 19.2 overs.

With a five-wicket win over Mumbai Indians, Dhoni clinched his 100th IPL win as the captain of the Chennai-based franchise.