New Delhi: India on Sunday reported a more than 94,000 recoveries taking its total number of cured cases to over 43 lakh mark.

According to the government, at least 94,612 people have recovered from the novel coronavirus infection in the last 24 hours taking the country’s total tally to 43,03,043, till September 20. The recovery rate is at 79.68 per cent.

“At least 60 per cent of the new recovered cases are being reported from five states.i.e. Maharashtra, Karnataka Andhra Pradesh, Uttar Pradesh and Tamil Nadu. Maharashtra continues to lead with more than 23,000 new cases of recovered patients. Karnataka and Andhra Pradesh both have contributed more than 10,000 to the single-day recoveries,” the health ministry further informed.

A total of 92,605 new cases were reported in the last 24 hours in the country, taking the cumulative active cases to over 54 lakh so far.

The Central government also informed that about 52 per cent of the new cases (active cases) are concentrated in five states, however, these are also the states contributing maximum to the new recoveries. 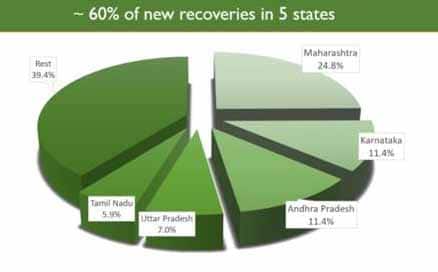 As many as 86,752 people have succumber to the COVID-19 infection and at least 1,133 fatalities have been registered in the past 24 hours alone.

According to the government, about 37 per cent of deaths reported on Saturday were from Maharashtra with 425 deaths followed by Karnataka and Uttar Pradesh with 114 and 84 deaths, respectively.