Kolkata: Trinamool Congress (TMC) MP from Basirhat, Nusrat Jahan, has filed a complaint with Kolkata Police’s Cyber Cell against a dating application for using her pictures without her consent.

In her complaint letter to Kolkata Police’s Cyber Cell, Nusrat Jahan wrote, “This is to bring to your kind notice that an advertisement is being circulated on Facebook, in the form of a sponsored post by a company named – FancyU – Video Chat App, using my pictures in an unauthorised manner without my consent.”

Jahan noticed the post after some people brought to her notice on the social media platform – Twitter. 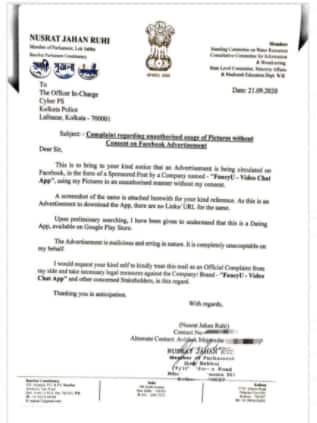 Immediately, the TMC MP requested the Cyber Cell to register a complaint. Responding to her concerns, the Kolkata Police informed that appropriate action has been initiated.

Earlier in the day, the actress-politician tweeted to Kolkata Police Commissioner Anuj Sharma and shared a screenshot of the advertisement.

She tweeted, “This is totally unacceptable – using pictures without consent. Would request the Cyber Cell of @KolkataPolice to kindly look into the same. I am ready to take this up legally.”

This is totally unacceptable – using pictures without consent. Would request the Cyber Cell of @KolkataPolice to kindly look into the same. I am ready to take this up legally. @CPKolkata https://t.co/KBgXLwSjR4

Nusrat Jahan, a Trinamool Congress (TMC) MP from Basirhat, is a prominent actress of the Bengali film industry. She was last seen in ‘Asur’ while her upcoming movie is ‘SOS Kolkata’.

China air force video appears to show simulated attack on US base on GuamPrev
Justice Ruth Bader Ginsburg to be honoured at US Supreme Court, CapitolNext