On Thursday evening,  Kohli dropped his Kings XI Punjab counterpart KL Rahul twice as his woeful display of fielding allowed the latter side post a daunting target of 207 runs.

After being dropped twice, Rahul went on to wreak havoc at the RCB bowlers in the death overs smacking boundaries all over the park. He scored 132 off 69 deliveries to eventually help Kings XI Punjab seal a crushing 97-run win over RCB at the Dubai International Stadium.

Gavaskar, who was doing commentary during the match, took a jibe at Kohli for dropping two crucial catches which cost the Bangalore-based franchise a thumping loss.

The Bollywood actress dubbed the former cricketer’s comments as ‘distasteful’ and hit back at him for accusing her for her husband’s performance.

“That, Mr Gavaskar, your message is distasteful is a fact but I would love for you to explain why you thought of making such a sweeping statement on a wife accusing her of her husband’s game? I’m sure over the years you have respected the private lives of every cricketer while commentating on the game. Don’t you think you should have equal amount of respect for me and us? I’m sure you can have many other words and sentences in your mind to use to comment on my husband’s performance from last night or are your words only relevant if you use my name in the process? Its 2020 and things still don’t change for me. When will I stop getting dragged into cricket and stop being used to pass sweeping statements? Respected Mr Gavaskar, you are a legend whose name stands tall in this gentleman’s game. Just wanted to tell you what I felt when I heard you say this,”Anushka wrote on her Instagram story. 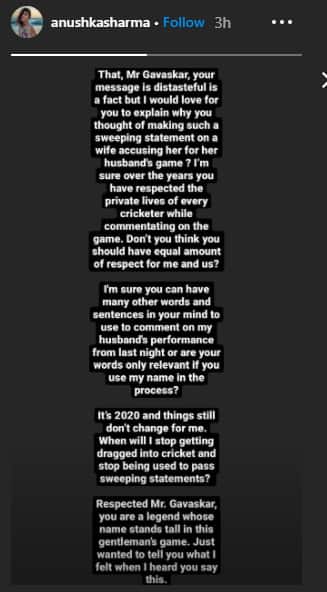 Many videos of Gavaskar’s jibe at Kohli and Anushka during the match have been doing the rounds on social media.Twitterati slammed Gavaskar for his ‘distasteful’ comment and demanded an apology for dragging Virat’s wife Anushka Sharma in the commentary out of nowhere.

On a related note, the Bangalore-based franchise will now lock horns with defending champions Mumbai Indians on September 29 in Dubai.