Tirumala: A meeting was held by TTD Chairman YV Subba Reddy along with a delegation of Shirdi Samsthan who visited Tirumala on Saturday for an on-site study of the Darshan management and other arrangements by TTD administration even in the Covid-19 situation following all the norms prescribed by Central and State Governments.

The review meeting was held at Annamayya Bhavan in Tirumala which was presided over by TTD Chairman along with TTD EO Anil Kumar Singhal.

A powerpoint presentation was made for the benefit of the visiting delegation on the Lord Balaji darshan, accommodation, queue lines management, Annaprasadam (free meals), Srivari Seva (volunteer services), Accounts, Laddu Prasadam counters during the COVID-19 restrictions period. A focus on the multifarious, devotee welfare, socio-economic-dharmic activities were also presented at the meeting.

Speaking, the TTD Chairman Y V Subba Reddy said that following directives of the Central and State Governments, the annual Brahmotsavams are being conducted in Ekantham following Agama traditions and performing all rituals.

He said that as a top Hindu temple, TTD is always ready to share with other temples on strategies for providing comfortable Darshan facilities to devotees.

The Samsthan officials were also appraised of the online facilities provided by TTD in Srivari Darshan tickets accommodation, donations, etc. 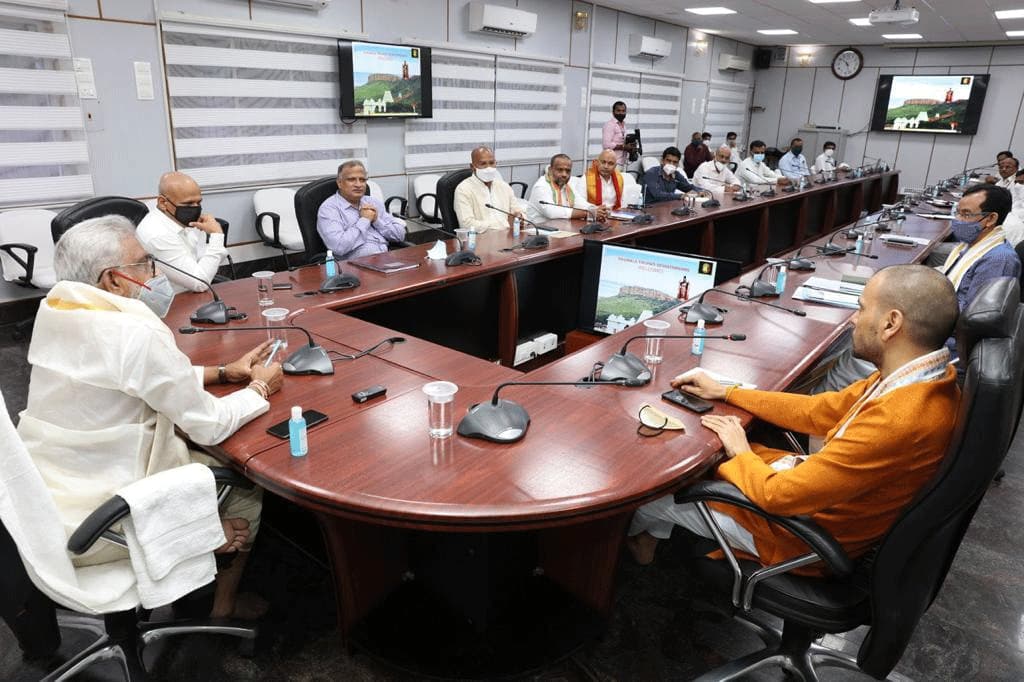 Adding further, the Chairman said under the direction Chief Minister of Andhra Pradesh Y S Jaganmohan Reddy, TTD has launched the unique Gudiko Gomata (one cow donation to one temple) program in 35 temples in AP, TS, TN and Karnataka on an experimental basis.

Harishchandra Bagate, the CEO of Shirdi Samsthan said his team witnessed the Queue line management, Anna Prasadam, Laddu Prasadam, Security and Vigilance. He also said, the strategies explained through the powerpoint presentation will be of great use for them to replicate at Shirdi.

TTD Chairman Y.V Subba Reddy told the CEO of Shirdi Samsthan to launch the Gudi-ko-Gomata program at Shirdi as well and has given a representation to this effect to him through TTD board member Siva Kumar.

The CEO of Shirdi shrine said, the Samsthan is also keen to present a Gomata to TTD and the unique programme will be discussed with Samathan Board for launching a similar program at Shirdi too.

TTD Chairman also said that he would present a Gomata to Shirdi Samsthan and said with blessings of the presiding deities of both the shrines, he is confident that the protection and promotion of indigenous Cows will be taken forward.