Prime Minister Narendra Modi will inaugurate the Atal Tunnel at Rohtang in Himachal Pradesh at 10 am on Saturday. The tunnel, which is the longest highway tunnel in the world, will reduces the road distance by 46 kms between Manali and Leh and the time by about 4 to 5 hrs, according to the Prime Minister’s Office.

Prior to leaving Manali, the Defence Minister took to social media and said, “Leaving for Manali on a two-day visit to Himachal Pradesh. I shall visit the @DRDO_India’s Snow & Avalanche Study establishment, interact with troops and review the preparations at the ‘Atal Tunnel, Rohtang’ today. PM Shri @narendramodi will inaugurate the ‘Atal Tunnel’ tomorrow.”

The 9.02 Km long Atal Tunnel is the longest highway tunnel in the World, connecting Manali to Lahaul-Spiti valley throughout the year.

Earlier the valley was cut off for about 6 months each year owing to heavy snowfall, but the Tunnel, built with ultra-modern specifications in the Pir Panjal range of Himalayas at an altitude of 3,000 meters (10,000 feet) from the Mean Sea Level (MSL), will reduce the road distance by 46 Kms between Manali and Leh and the time by about five to six hours.

The tunnel is a horseshoe-shaped, single tube double lane tunnel with a roadway of 8 meters, has an overhead clearance of 5.525 meters. It is 10.5-metre wide and has a 3.6 x 2.25 meters fireproof emergency egress tunnel built into the main tunnel itself.

Atal Tunnel has been designed for a traffic density of 3,000 cars per day and 1,500 trucks per day with a max speed of 80 km per hour. Among other features, it has a state-of-the-art electromechanical system including semi transverse ventilation system, SCADA controlled firefighting, illumination, and monitoring system. 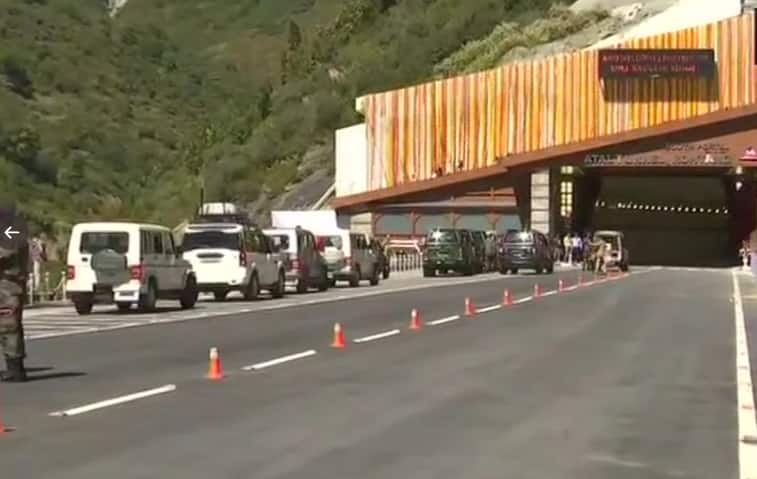 Some of the key safety features of the Atal tunnel are:

– Entry barriers at both portals, telephone connections at every 150 meters for emergency communication

– Fire hydrant mechanisms at every 60 meters, auto incident detection system with CCTV cameras at every 250 meters

– Air quality monitoring at every 1 km, evacuation lighting or exit signs at every 25 meters

– Broadcasting system throughout the tunnel, fire-rated Dampers at every 50 meters and also has cameras at every 60 meters.

Notably, the decision to construct this tunnel below the Rohtang Pass was taken on June 3, 2000, when late Atal Bihari Vajpayee was the Prime Minister. The foundation stone for the Access Road to the South Portal of the tunnel was laid on May 26, 2002.