New Delhi: Amid huge public outcry over the horrific Hathras gang-rape, Uttar Pradesh Chief Minister Yogi Adityanath on Friday (October 2) issued strict order to suspend top police officials of the Hathras district. The Chief Minister also ordered the narco test of both the parties along with the police officials.

According to reports, the Yogi government ordered to suspend SP Vikrant Veer on the basis of a preliminary investigation conducted by the state government.  Other officials suspended are CO Ram Shabd, Inspector Dinesh Kumar Verma, SI Jagveer Singh and head constable Mahesh Pal.

A statement from the Chief Minister’s Office (CMO) on Friday evening said, “In the Hathras case, UP Chief Minister Yogi Adityanath has directed to suspend the SP, DSP, inspector and some others officials, based on the preliminary investigation report.”

“Narco-polygraph tests of the SP and DSP will also be conducted,” the statement further said. 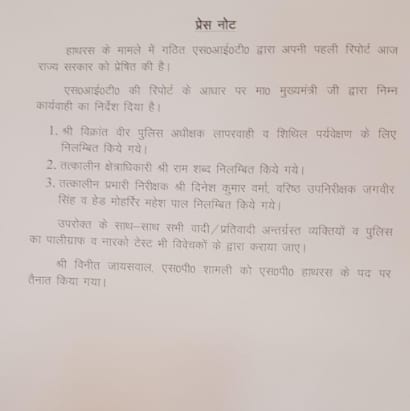 Hathras District Magistrate PK Laxkar, however, has been spared. Earlier on Thursday, he denied “negative rumours” about the rift between him and the family of the gangrape victim.

Laskar had told ANI, “I met with six family members of the victim yesterday and we spoke for about an hour and a half. I met with them again today to see their point of discontent,” adding “I deny the negative rumours which are rife about my interactions with them.”

Earlier in the day, Chief Minister Yogi Adityanath said that the culprits behind such heinous crimes will face the strictest possible action. He took to Twitter to condemn the rape cases that have come to light in the past week in Hathras, Balrampur, Bulandshahr and Azamgarh and said the culprits will face consequences that will set an example for others and will be remembered by people.

He tweeted in Hindi, “The ones who even think of harming the respect and dignity of the mothers and sisters of UP will be destroyed. They will face consequences of the kind that will set an example to others. The government is committed to the safety and progress of your sisters and mothers. This is our commitment, this is our promise.”

Notably, a family member of Hathras incident victim today complained that they are being stopped from speaking to media. The administration has imposed section 144 of CrPC in this village of Hathras.

On Friday morning, a minor from the victim`s family was sent by the family members to reach out to the media anyhow and ask to connect with them. He revealed that they were asked to switch-off their mobiles have and some mobiles are being taken from them.

BJP leader Uma Bharti today raised doubts about the investigation by the Special Investigation Team (SIT) in Hathras incident. She said that there is no rule that the family cannot meet anyone during the SIT probe according to her knowledge.

Bharti, who is under treatment for COVID-19 in AIIMS Rishikesh, took to twitter and said, “To my knowledge, there is no such rule that the family could not meet anyone during the SIT investigation. With this, the investigation of the SIT itself will come under doubt.”

She said that the image of the Uttar Pradesh government and BJP has been tarnished due to the suspicious action of the police in this incident and requested the authorities to let the family meet media and political parties.

“You are the ruler with a very clean image. I request you to allow media persons and political parties to meet the aggrieved family,” she tweeted

The 19-year-old Hathras woman died at Delhi`s Safdarjung hospital on September 29, a fortnight after allegedly being gang-raped. All the four accused in the incident have been arrested

The post-mortem report reads that the victim suffered a fracture of “C6 cervical vertebra” and there was “extravasations of blood along the fracture line” and the underlying spinal cord was “contused with ascending oedema”. The postmortem report, however, denies rape charges.