New Delhi: Probably for the first time the visit of Sikh devotees (Jatha), if allowed, going to Pakistan to celebrate the birth anniversary of the founder of Sikhism, Baba Guru Nanak, have been cut short to half owing to coronavirus pandemic.

As if this was not enough, the Pakistan government have also decided to refrain the movement of Sikh devotees within in Nankana Sahib and they will not be allowed to even visit Kartapur Sahib or other Gurdwara’s in the neighbouring country.

Aamer Ahmad, Chairman of Evacuee Trust Property Board (ETPB) said the decision had been taken since the covid 19 Standard Operating Procedures (SOP) were in place and was best suited for the visiting devotees.

He informed that as against a visit of ten days, the Pakistan government had decided to cut short the Sikh Yatree’s visit to half so they could at least fulfil their religious aspirations.

As per the Pakistan-India bilateral agreement, since many years Pakistan has been granting pilgrims visas to more than 4,000 Indian Sikh to be allowed entry into the country for the Baba Guru Nanak Gurpurab celebrations.

In the past, pilgrims had the option of a 10-day visa to visit multiple Gurdwaras in Lahore, Nankana Sahib, Hassan Abdal, Rohri Sahib, Farooqbad and Kartarpur Sahib.

Notably, a Sikh jatha would be visiting Pakistan, provided if both the countries agreed, to pay obeisance at Gurdwara Nankana Sahib, the birthplace of Baba Guru Nanak, on the occasion of 551st birth anniversary of Baba Guru Nanak being celebrated on November 30.

Giving details, ETPB spokesperson Aamir Hashmi informed that according to a programme chalked out by them, they would receive the Indian Sikh Yatree’s at Wagah (Pakistan) International border on November 27 and from there they would straight be taken to Nankana Sahib in special buses.

He said, “They (pilgrims ) will be free to go anywhere in Nankana Sahib but not outside the town and on December 1 we will bid them farewell at the international border.”

Cutting half of the Yatra has not gone well with many Sikh religious organisations who have appealed to Pakistan government to at least let the devotees for one week and allow them to pay obeisance at the historical Gurudwara in Lahore.

Significantly, Parmjit Singh Sarna, former President of Delhi Sikh Gurdwara Management Committee has, in a letter to the Prime Minister Narinder Modi and Rajnath Singh, defence minister, requested government of India to let the pilgrims to go to Pakistan to commemorate the completion of 550th birth anniversary of Baba Guru Nanak.

While talking to DNA, Sarna said, “we understand the ongoing and increasing covid crises, so they would be agreed even if the government allows a symbolic jatha of minimum numbers of devotes to Pakistan.” 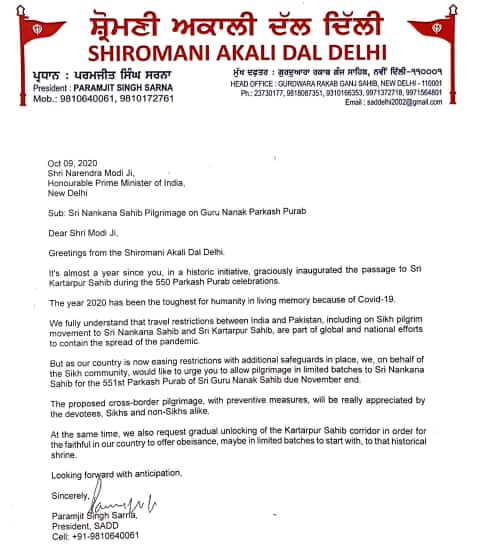 While requesting PM, Sarna said, “As India is now easing restrictions with additional safeguards in place, we on behalf of the Sikh community would like to urge you to allow pilgrimage In limited batches to Sri Nankana Sahib for the 551st  Prakash Purav of Guru Nanak sahib due November end.”

It is pertinent to mention that aftermath of December 13 terror attack on the Indian Parliament sent a token jatha of about 50 Sikh pilgrims to Pakistan to celebrate the birth anniversary of Baba Guru Nanak.

On March 18, both India and Pakistan had sealed their international borders to prevent the spread of coronavirus. This will be the first religious group visiting Pakistan post lockdown. Earlier, the Sikh jatha’s going to Pakistan to celebrate Vaisakhi in April, martyrdom day of Guru Arjan Dev and death anniversary of Maharaja Ranjit Singh, observed in June, were cancelled.

Harpal Singh Bhullar, president of Ferozpur based  Bhai Mardana Yadgari Kirtan Darbar Society said that they had written a letter to Pakistan Punjab’s governor Chaudhary Mohammad Sarwar urging his intervention for extending the Sikh jatha’s visit to at least one week and allowing them to pay obeisance at Gurdwara Dera Sahib and Gurdwara Janamasthan Guru Ram Das, Lahore.

Notably, there are about 200 historical Sikh shrines in Pakistan but Pakistan for the last many years, allowed Sikh jatha to visit a couple of them.