Delhi Health Minister said the unconditional apology tendered to him by Kapil Mishra has proved that the graft allegations the latter had levelled against him had no ground and were made with a political purpose.

On May 4, 2017, Kapil Mishra had made allegations against Satyendar Jain that the latter gave Rs 2 crore to Delhi Chief Minister Arvind Kejriwal. Mishra made these allegations after being sacked by the AAP government.

The complaint was filed by Jain against Mishra in 2017 for his defamatory statements against him and Chief Minister Arvind Kejriwal.

Satyendar Jain said Mishra’s allegations had caused him a lot of stress. “He submitted a written apology stating that the accusations he made were politically motivated, and wrong,” Jain told reporters.

“He has tendered an unconditional public apology and assured non-repetition of the same. The unconditional apology exposes the reality that Mishra had no ground to such allegations and did that with a political purpose,” Jain said. 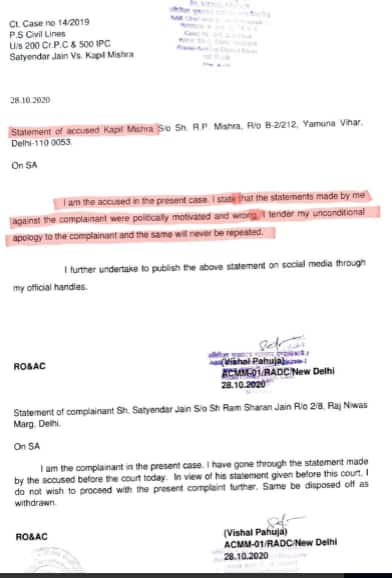 In his statement, Mishra said that his complaints were politically motivated and would never be repeated again.

Mishra said, “I am the accused in the present case. I state that the statements made by me tender my unconditional against the complainant were politically motivated and wrong and the same will never be repeated.”