Mumbai: Bollywood personalities, including Akshay Kumar, Rohit Shetty and Sara Ali Khan, on Friday paid tribute to all those people who lost their lives in the 26/11 Mumbai terror attacks.

The celebrities took to social media to remember and mourn the martyrs as well as civilians, who died in the attacks.

Megastar Amitabh Bachchan in an Op-ed for the Indian Express said every year as he marks the day, he discovers that the power of survival is linked to the power of humanity, of “our collective commitment that we shall not let the terrorists define who we become”.

Kumar called the Mumbai terror attacks “horrific” as he gave a shout out to all those involved in keeping the country and its people safe.

“It’s been 13 years since the horrific #MumbaiTerrorAttack. Remembering all those who lost their lives and loved ones. My heartfelt tribute to all the bravehearts who sacrificed their lives safeguarding our city,” the 54-year-old star tweeted.

It’s been 13 years since the horrific #MumbaiTerrorAttack. Remembering all those who lost their lives and loved ones. My heartfelt tribute to all the bravehearts who sacrificed their lives safeguarding our city

Shetty, who has several helmed films in his cop universe including the latest ‘Sooryavanshi’, ‘Simmba’ and ‘Singham’ franchise, took to Instagram to hail the spirit of the Mumbai Police and its personnel.

“@mumbaipolice We will forever carry their unyielding spirits in our hearts. Their sacrifice will always be remembered,” he said.

Sara Ali Khan posted a photo on her Instagram Stories of Taj Mahal hotel, one of the places attacked by terrorist during the 26/11 terror attacks.

“The martyrs will be remembered @mumbaipolice,” the actor wrote. 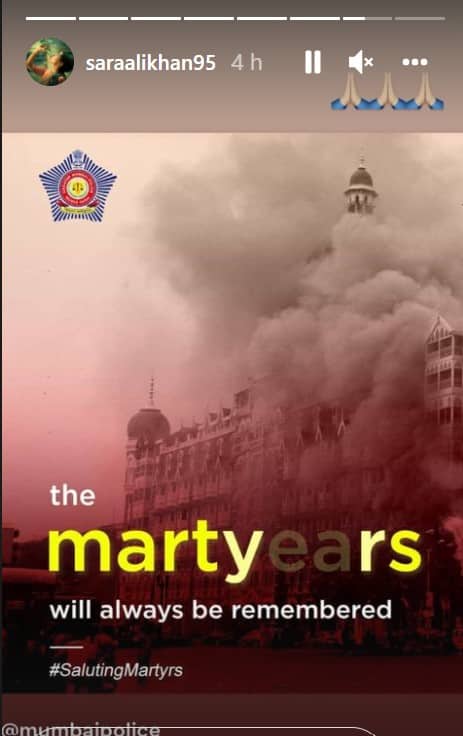 Shetty said she is praying for the “departed souls” and also the people whose lives were “changed, affected and altered” on the fateful night. 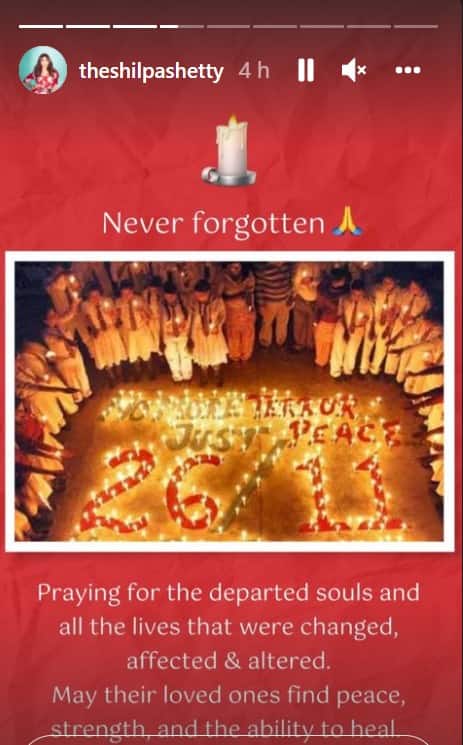 “May their loved ones find peace, strength and the ability to heal,” she wrote on her Instagram Stories.

“Sitting in the news room in Delhi with the cast of #sorryBhai. My film was releasing the next day. First was told it’s a gang war and then the truth surfaced. What devastating days. #26/11 #neverforget” he tweeted.

On November 26, 2008, 10 Lashkar-e-Taiba terrorists from Pakistan arrived by sea route and opened fire, killing 166 people, including 18 security personnel, and injuring several others during the 60-hour siege in Mumbai.

Actors Ranvir Shorey and Richa Chadha also remembered brave hearts who laid down their lives during the attacks.